It is necessary to understand the operation of the ultrasonic welding machine components and the whole system works. It streamlines the procedure of defining the best welding technique for every application.

At the core of ultrasonic plastic-welding machine, there lies a transducer assembly, which is referred to as the âstackâ. It usually comprises of three components: the booster, converter and weld horn. All these components link together at a particular torque valve and work as a resonating or vibrating equipment.

The converter acts as a vibration source. In the interior of the converter are piezoelectric ceramic disks, which are sandwiched around the metal plates. These disks are clamped under very high pressure to a cautiously designed titanium cylinder. High-frequency electrical energy is supplied to the system module by a generator. In response to high frequency electrical signal, the piezoelectric ceramics expand and contract, when a cable feeds power to the converter. This mechanical vibration is transmitted by the titanium cylinder to the other components of the stack.

The vibrations produced by the converter are about 9mm zero to peak. This is not sufficient vibration to get a proper melt temperature for the thermoplastic resins. The booster intensifies the input vibration, intensifying the vibration as per the ratio defined by booster design.

The weld horn allocates the produced energy to thermoplastic workpieces. The design of weld horns matches with the workpiece contours. It reduces the vibration distributed from the booster to a definite value and applies forces essential for the procedure to work. These weld horn and booster are planned to get an axial mode of vibration at the frequency, which the generator signal vacillates the converter.

The resultant mechanical vibration begins melt at the edge of the two thermoplastic constituents. The term taken into use to define the quantity of vibration in ultrasonic stack is " amplitude." Every thermoplastic will have a precise amplitude range that will competently begin melt. The booster, right converter, and appropriately designed weld horn are all necessary for providing the amplitude a specific application requirement. Amplitudes out of range can result in poor bonds or harm the ingredients all together.

Trial and error is one method of defining a thermoplastic's most effective amplitude. However, most manufacturers of ultrasonic welders have bounty data existing for an extensive range of thermoplastics.

Plastic-welding equipment have several settings that regulate force, amplitude, and exposure. These three features interact and influence the success or failure of welding process or plastic melt. Plastic melt happens when the substance at the part-to-part edge melts and the parts bond with the essential strength and seal necessities of the assembly.

Amplitude is the face of the quantity of expansion at the close of the weld horn from a stationary position, which is measured in microns. This can be set as a percentage value, like a process parameter, or like a relative position of a pot. This is measured outwardly as microns or like a decimal value of an inch. For most of the thermoplastic resins, empirical data advises a variety of amplitude, which should be existing at the edge of the weld horn for achieving a "normal" welding procedure. For a 20-kHz ultrasonic-welding procedure, for instance, polystyrene (PS) needs 15 to 20 m (0 to peak), and high-density polyethylene (HDPE) requires 45 to 50 m (0 to peak).

Force is the real applied force pressing on the components, measured in pounds of force (lbf) or Newtons. The quantity of force essential for a " normal" welding procedure is chiefly affected by the dimensions of the parts. As a basic rule, approximately 1 lbf offers 1 linear mm of energy focused at the part-to-part interface.

Exposure is the interval of the application of force and vibration, measured in seconds.

Innovations in ultrasonic plastic technology takes care of each of these variables.

Line-voltage regulation innovations in generators and power modules safeguard the high-frequency signal used to the converter generates output amplitudes, which lie within strongly controlled specifications. It is perilous to the welding procedure. Amplitude is the main parameter, which makes the welding procedure efficient. The weld horn and booster components are only reactive sections of compression waveform in the stack. So, the input amplitude from the converter should be right to get the goal amplitude at the end of the weld horn.

The amplitude of the system requires calibration to sustain weld quality and constancy. Handlers should note each converter is made within a demanding specification. The amplitude production of any converter will be within requirement irrespective the generator it attaches to. It allows a validated procedure be set-up on one machine, possibly in an R&D lab. The procedure can then handover to another machine â in alternative manufacturing facility.

Proportional-valve assemblies regulate the pneumatic system of a plastic-welding machine. These assemblies therefore dynamically regulate the forces through the plastic-welding procedure. Amplitude and force are cooperative. Amplitude defines the compressive waveform useful to the workpiece. Force defines the technique of transporting the vibration into workpiece. The regulator voltages of the proportional valve are adjusted. This adjustment allows a numeric value for the welding limitations of weld force, trigger force, or hold force signify an actual applied force.

Furthermore, a pressure transducer in the proportional-valve system provides closed-loop regulator of the compression in the drive cylinder. This removes variations in the arriving air pressure. System calibration allows validated procedure parameters to be applied on multiple machines. Instead, there can be a huge level of confidence for procedure-validation protocols attained with ultrasonic plastic-welding machines, which feature standardized amplitude and force.

Exposure is set by the weld technique and is the reason that turns off the power part. The four standard weld techniques are: energy, relative distance, time, and absolute distance. Of course, numerous manufacturers of ultrasonic plastic-welding machine may use somewhat different terms for these techniques; for instance, one may employ the term "collapse" for relative distance.

Plastic assemblies precisely designed for ultrasonic welding integrate geometries at the edge between the two-or-more constituents, which help begin plastic melt in the weld joint point. These geometries rely on standard joint design principles. They signify a capacity of plastic to be melted. When the plastic melts and flows within the combined the welder can screen a weld collapse or distance. This distance powerfully associates to the forte of the weld joint.

Some assemblies need tight tolerances on the inclusive length (OAL) of the complete part. Exposure schemes based on complete distance will stop the welding procedure while they look the OAL value. Sometimes, weld station timing or production rate in an entirely automated assembly line is more essential than improving the forte of the weld joint. In that state, time is the ideal weld method.

Many systems also provide energy as a weld technique. They use a definite energy value planned by the power module. Mark this energy value is the volume of power used to sustain the amplitude production of the converter. The dynamics of starting and filling the plastic melt in the joint design domain marks how much power the converter requires. But other procedure variables can also influence the energy and power values. Occasionally an energy value relates to a decent weld. Though, it is a general practice to base the choice about weld technique on data from weld trials, which the welding-machine supplier performs. 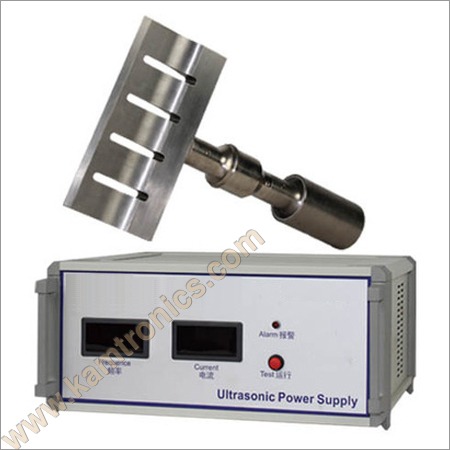